Some have ask, "When did it all start?"  Let me share the story several decades in the making.

High Country Lights began as a small light display back in the early 80's.  When the Christmas season inched closer, my father and I would hang lights around the porch.  I remember him using the staple gun while holding those twisted-wire C9 blue-bulb lights.  What an energy hog they were but beautiful.

As the years past, I realized that Christmas lighting could be brighter.  In the late 80's, I did just that.  Going to any department or home improvement store and buying those new and energy efficient "mini lights."  They were the hot new trend in Christmas lighting.  They only had multi-color and clear bulbs at the time.  With the combination of the two, my first year was indeed brighter.  That was 10K more lights brighter.

With those extra lights, my Christmas spirit started becoming contagious. The neighbors began to decorate a little more next season and Christmas at Saddle Mountain was born.  Christmas at Saddle Mountain featured more than 100K lights spread throughout eight homes for one half mile.  All neighbors would help each other decorate so that we could light them on time - December 1st.  Thousands of visitors would come to see all of those static bulbs illuminate the night sky.  From Basketball goals, satellite dishes, lawns, miniature trees, to utility poles, everything had lights wrapped on it to the maximum.

Our Christmas light display was featured in the local newspaper several times and on TV.  It was something everyone enjoyed for many years.  While we enjoyed hanging lights and decorating, eventually it would come to an end.  Some neighbors passed on while others were to the point in life they could no longer decorate.  So the street began to dim more and more each year until I moved to a new home.

After moving to my new home, I began to decorate once again. Hanging a few lights on the house and placing electric candles in the windows until I saw a really neat video one day.  This video had Christmas lights synchronized to music.  I watched over and over until I couldn't take it any longer.  The display was called "Twas The Night Before."  After researching this new concept for months, I decided now was the time to try something new.  I bought a 32 channel setup late 2004 and was very excited in this new process.

When I connected all of those extension cords and lights, it was time to hit the switch.  I invited some neighbors over to a snack and watch this new technology.  Six o'clock hit, and nothing.  I felt like Clark Griswold.  The neighbors went inside to play Rook, while I trouble shoot for several hours.  It finally dawned on me to press the right button on the computer.  When I did, we were all amazed and the season went on much brighter. While I was getting a start, a viral video hit the internet with a passion.  Carson Williams was instantly popular with his house synchronized to Tran-Siberian Orchestra's Wizards In Winter song.

More trouble hit a couple of weeks before Christmas.  After contacting the company multiple times, I finally received a replacement board on December 23rd.  At that time, I made the decision to change companies but continue this new synchronized lighting hobby.

The next season,  I invested in a new 128 channel system and software from Light-O-Rama.  After countless hours of synchronizing music to lights - 2006 turned out to be much better than 2005.  So much, that the word was getting out about someone having neat Christmas lights play to music on the radio.  The roadside and the main parking area near the house was full of vehicles each night.  Thus, Blue Ridge Christmas was a huge hit.

The display continued to grow in size and traffic each season.  Adding more large "Mega-Trees" and other props throughout the display.  In 2007, it was renamed "High Country Lights" by The Demented Elf.  High Country Lights growth was so exponentially, over 100K lights, more than one hour of music playing, and the debut of the website, it was evident that it needed to be relocated somewhere else.  But it continued on.

2009 season proved to be a challenging one.  The display was shutdown down or turned off early because of snow, freezing rain, wind, and/or fog for many days.  When the show was running, visitors had very little room to park because of snow drifts or high snow banks along the road.  The Winter of 2009-2010 went down in the record books as very cold and lots of snow.

During the Summer of 2010, the decision was made to relocate to Glade Creek Volunteer Fire Department.  The benefits of moving there were parking and more room to expand.  Plus, booking special events like Santa visiting and live performances too.  Hauling all of those lights, decorations, cords, pipe, and much more seemed tedious at first.  It took over 15 trips to haul all of it to the fire department.  An electrician had to rewire main outlets and run extra cable to get the show running in time.

Thanksgiving 2010 rolls around and the display is 90 percent completed.  I had much more to put up and trouble shoot so the show could go full steam ahead.  Five o'clock slipped up quickly and it was time to quit.  By the end of the day, it was 95 percent ready and I decided to add all of the minor things Friday and Saturday.  Five thirty, now people are beginning to gather in the parking lot.  Five-fifty-five, the place is loaded with people ready to watch.  I pressed the button to enable the show for six o'clock.  I waited until the opening announcement started playing.  My thoughts were, I hope everything is working properly because it's too late now.  Six-O-One, we have light.  The 2010 season at Glade Creek Volunteer Fire Department was deemed successful with everything working and relocating.

After five successful seasons at the fire station, the display moved once again.  This time, across the state line. 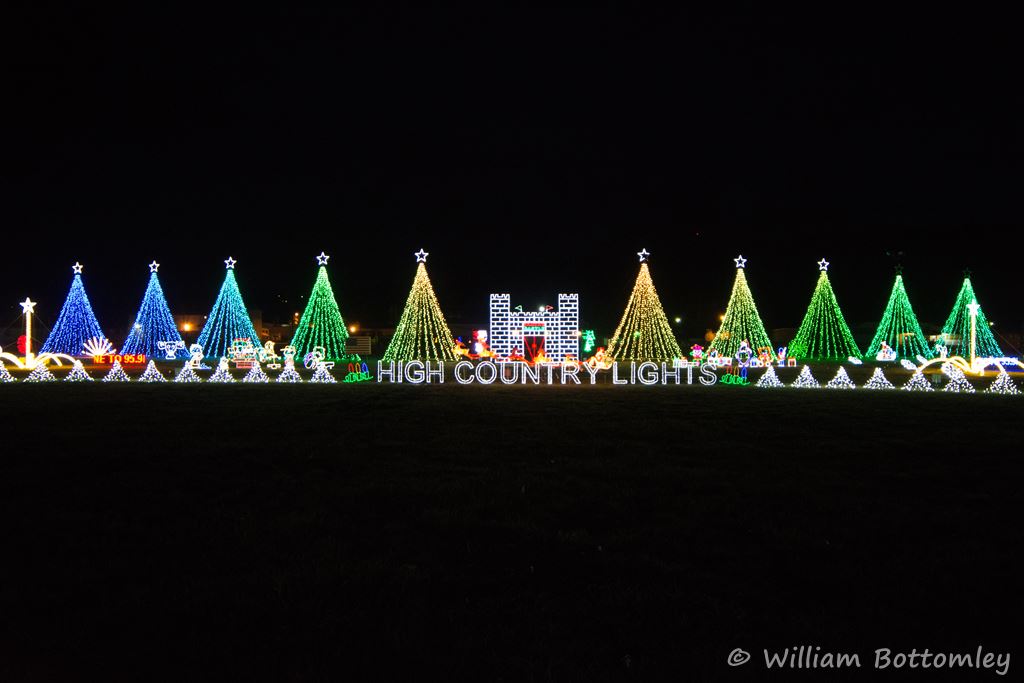 The City of Galax & Parks and Recreation Department, welcomed our display in 2015.  We were met with a huge, warm welcome with tons of support.  Since moving to Felts Park, we've seen our guests double each year.  In fact, it's one of the most popular attractions in the region during the holiday's.  In 2019, it was estimated that 15K-20K vehicles and 60K visitors came to watch the show.

Hopefully this will give a little insight of how High Country Lights is several decades in the making.